A few weekends ago, I had a very special experience. Mostly because I got a chance to hang out with my whole dance company as we attended the final social of a prominent dance group named Modern Clave. It also helped greatly that I got a chance to eat Sushi with the crew beforehand and have a drinky-drink! Once we arrived at the studio, I could sense the energy in the air. It was both electric and nervous, happy yet slightly somber. At around the 11 o’clock hour, the company began a set of two shows, one from out of town guests and another as their final bow.

The first set went off without a hitch and the performers, mostly from Milwaukee, represented themselves very well. Kudos to Milwaukee! Once the second set began, everyone who made it to the social that night was at full attention and was ready to see Modern Clave dance as a united company one last time. Jesus and Amanda set the mood of the evening with a beautiful pat a deux that was wonderfully danced. It began with a sincere declaration of love and respect from Amanda to Jesus, who is moving from Chicago to Canada which is the reason the company is disbanding. Suffice to say, I was moved by the piece. On a personal note, I’ve always wanted to do a piece which ‘moved’ people. Something beautiful. I know I’ll get to it and I was happy to see Jesus and Amanda inspire me to act on the impulse.

Afterwards, Jesus, now out of breathe but battling through like a trooper pressed onward and led his Pro company through a medley of all five of their major company choreographies. We didn’t get 100% of each piece, but instead got a bombastic teaser of everything that flowed seamlessly as a demonstration of the style that Jesus had developed and refined through the existence of Modern Clave. That’s truly one of the best things about seeing tribute pieces from dance companies, they allow you to witness the growth of the dancers and the artistic growth of the choreographers as well. It takes time to find your ‘dance voice,’ so it’s beautiful to see things laid out in chronological order. Once it was all said and done, Modern Clave left us with a reminder of how much they accomplished as a company and how sorely their unique voice will be missed in the Chicago community.

I was also touched that Jesus, in his farewell speech took a moment to acknowledge me and call me one of his ‘dance-dads.’ It’s on this that I’d like to expand upon and say farewell and godspeed to a friend.

Jesus and I go back…way back. He walked in one day as a super baby-faced kid into the back room of Dance Connection. You see, I had taken over Sekou’s classes and was teaching the Descraga Caribe Mambo classes for the group. I had a pretty nice following and I was growing my classes bit by bit over time. Meeting Jesus as a total newbie was great as he had and has the same determined and focused attitude while still remaining light-hearted and funny. It didn’t take long for Jesus to get snatched up into Descarga’s semi-pro team, Pa’lante. Jesus excelled in that environment and quickly became one of the lead dancers in the company alongside other notable Chicago legends like MMA’s queen bee Laura Flores and Adrian Tenorio. Due to their obvious skill and dedication, all three eventually moved up to the pro team and we continued to work together under the direction of Sekou.

Fast forward a bit and Sekou decided to leave for New York and leave us scrambling to keep both groups afloat. While I was handed the hot potato of directing and running the main company (Descarga Caribe), I was not prepared at the time for such a huge responsibility. As always, life is about experiences and lessons and I learned through trial and error how NOT to run a company which gave me more ammunition to try again later with Mixed Motion Art’s professional team. During this whole transition from the post-Sekou era, Descarga Caribe eventually disbanded but thankfully most of us kept dancing in one way shape or form. There is a lot more to the story, but the key point is the team breakup was the impetus for Jesus to start his own group, Modern Clave.

From my recollection, the team I just saw disband this last weekend was version 2.0 of Modern Clave. The first attempt at MC was a two couple squad which put together a few pieces before an unlikely injury to Jesus caused the group to take a hiatus. Once he was able, Jesus re-formed the group to what it became. In the interest of keeping this positive, I mentioned to Jesus one crucially important thing that I also mentioned to his co-director Amanda.

“I respect you guys because you were always striving for excellence, you’ll be missed.”

In a dance community where good enough is the norm, to have a group which aspired to greater things is a rarity. This was not a company which was a glorified social club or a group of people who were in it for fun. No, this team trying and succeeding in carving out a new type of Latin movement which was unique to our city. Whereas Laura and I infuse our work with Ballroom influence and refined partnering, Modern Clave took the approach of Balletic and Jazzy movement and fused it with Latin dancing in a way that was unique to them and a joy to see.

As someone who watched a kid walk into my class and not know the most basic of steps to watching a grown man dance his heart out and display his body of work was fascinating. This young man never wanted be just good enough, he was/is after greatness. I applaud you Jesus Aguilera and wish you the absolute best in your travels. As many of your faithful dancers have expressed on social media, this isn’t good bye, it’s see you later. 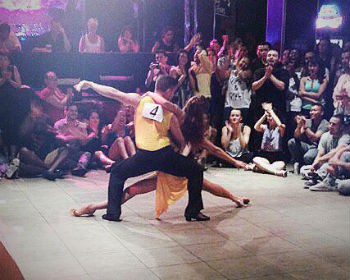 I fully expect to see you succeed in your dance career and in life. Be strong. Be fearless and be all out.

Love you friend, thanks for reminding me and others that good enough is never enough.